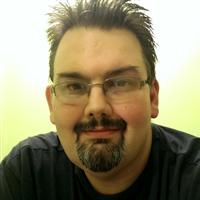 Senior company Developer Daryl Burns has spent time in the past working for a number of small and large companies, including Siemens, and he takes time out to speak to us about his crucial role within the company and what he loves about working for us…
A self-confessed technology buff, Daryl isn’t any ordinary member of the Pebbletree team; he’s been with the company since almost its beginning and apart from our co-founders is the longest serving employee on the books.
He is one of a team of four developers and is jointly responsible for the smooth running of our brand websites and our award-winning VoIP platform, as well as implementing new ideas and features which keep us ahead of our competition.

And while his pivotal role within the organisation may be testing, it’s certainly a one he values and enjoys tackling on a daily basis. “It’s by far the best company that I have worked for,” he said. “And I’ve worked for several small and large companies in the past!”
“The people within the company all work, and play together, as a close little family. We all have great banter with each other. The role, although has its challenges, is certainly varied, and keeps the old grey matter ticking. The directors of the company certainly look after the employees here too.”


Pebbletree Ltd was incorporated in 2005 and Daryl joined shortly after in 2007, so this year will be his eighth consecutive year, during which time he’s witnessed the company grow from strength to strength.
He said: “When I started back in 2007, we were a small and innovative software company, working with a couple of larger companies to provide web solutions and telephony services.”
“In that time, the company has expanded from a two-man team working out of our own homes, to being a multi-award winning VoIP provider, with over 20 staff in the UK and Ireland. Seeing, and being a part of that kind of growth of a company, has been truly amazing!”

After so many years at the same company you could be forgiven for thinking time would slowly wear away the drive and determination, but a range of factors ensure Daryl’s sense of purpose and tenacity are as great as they were eight years ago.
This continued hunger is largely put down the colleagues he works side by side with each day, as well as the pride gained from knowing the work we do provides satisfaction to so many thousands of people running their own businesses.
“I think the fact that I really enjoy the role and believe in the solutions that we provide, is a significant factor,” he said. “I’m a bit of a nerd outside the office as well and all things to do with technology interest me.”
“There’s the knowledge that the solutions we provide are consumed and appreciated by many thousands of companies and people from all walks of life. Then, there’s the people that I work with – I have a good working relationship with the other team members, and indeed everyone across the company.”
He feels the company’s value for money, reliability and flexibility is what stands us out from our competitors and makes us special. “We’re quite possibly one of the lower priced business internet telephony providers on the market,” he said. “However, just because we’re low priced, doesn’t mean the service suffers.”


“With a service uptime that’s consistently over 99.95%, we’re also one of the more reliable providers. As for simplicity and flexibility – there’s not many other telephony companies out there that will allow you to set your telephony system up within 15 minutes of making the decision to buy, and then take your office anywhere in the world with you.”

Spare time and the future of VoIP

But what about outside of work? How does someone with such an aptitude for all-things technology and development unwind after a week at Pebbletree HQ?
He said: “Outside of work, I would have to say the most important thing is family and spending time with them. My son is a bit of a nerd, just like me, and I enjoy giving him the benefits of my knowledge (as well as entertaining his addiction to Minecraft).”
“After family, I have a significant interest in all things technological, and I’m quite often seen hammering away at a keyboard to learn new skills, which I can use both in and out of work.”
And as for where VoIP is headed, in Daryl’s expert opinion…“Whilst I appreciate that VoIP has matured a great deal over the eight years that I’ve worked with the company, I still think there’s a good proportion of people that don’t understand the technology and benefits that VoIP has to offer.”
“I think that there is still a great deal of expansion to come in the VoIP market and in time, we’ll see businesses and even home users using VoIP as a preference to copper based telephone systems.”