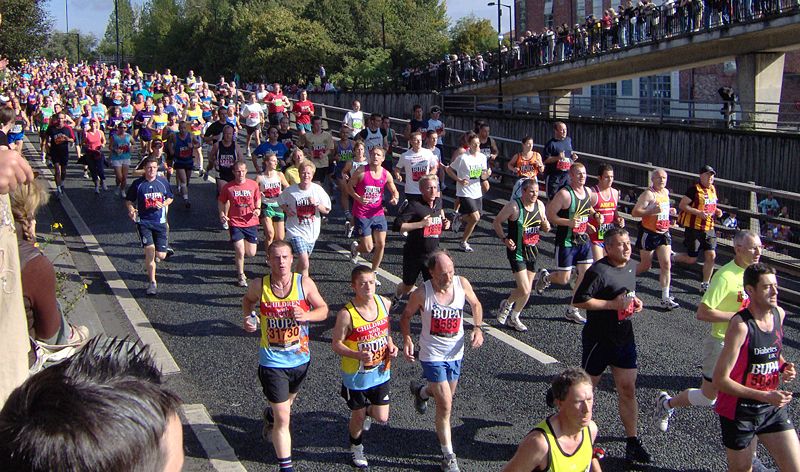 Sunburn, dodging barriers and chasing zombies – all in the name of charity!

In keeping with the charitable nature of Pebbletree, the most recent member of staff to give back to the community is our Commercial Team Supervisor, Laura Marriner.
Laura geared up alongside 56,000 other runners to tackle the Great North Run to accomplish her second charity run in a matter of months, having previously completed the Race For Life in May, making her the undisputed Pebbletree running champion.

She took part in the 13-mile half marathon in aid of St Benedict’s Hospice and Help the Hospices, both of which mean a lot to Laura personally, raising more than £400 for the charities.
It took months of dedication; getting up even earlier than usual on weekdays and avoiding the temptation to indulge too much on weekends.
She said: “I started training for the GNR in March/April, so training for both races rolled into place nicely alongside each other. Training was gruesome as there were a lot of early morning runs to fit in before work and longer runs on weekends, in order to get up to a decent pace.”
“On top of that I suffered injury after injury which really set me back,” she added.

Although Laura concedes it was an emotional day to begin with due to the cause she was running for, the adrenalin soon kicked in and next thing she knew she was dodging barriers and chasing zombies.
“After misjudging the crowds I thought at one point I wasn’t going to be able to start on time,” she said. “I had to shimmy under a barrier being held up by other runners just to get in the starting blocks!”
“I can remember at one point I was running alongside a guy dressed as a zombie, which I found funny as it was quite ironic that I was chasing him!”
Feeling the effects of being exposed to the sun for such a length of time, on top of the inevitable tiredness, it hasn’t deterred Laura from wanting to compete again and aim to better her finishing time – which happened to be a very respectable 2 hours 44 minutes.
She said: “I’m hoping to run again next year (and probably years to come) to beat my time, as the heat really got to me this year – I even had the sunburn to prove it!”
“It’s a great day and worth all the training, and the fact that you’re running for such a good cause keeps you going even when you get to the last mile, which seems never ending!”
Well done Laura – a great achievement!
Featured image courtesy of “Julia” and licensed for reuse under this “Creative Commons Licence”.
Secondary image © Copyright “Bill Henderson” and licensed for reuse under this “Creative Commons Licence”.